As I think about how to celebrate Christmas, it helps me to re-read the biblical story and remember some of the critical events. These events help me understand Christmas and point me towards what is important. The Glorify App will also be a great aid as you think about celebrating Christmas as it provides specific devotionals, music and stories on Christmas.

Christians around the world begin the Christmas season with a period called Advent. The weeks running up to Christmas Day are a time for Christians to wait in expectation for God’s promise. You see, the whole biblical narrative, from Genesis throughout the Old Testament, is leading up to the moment when Christ is born. The prophet Isaiah speaks of the moment so clearly.

For to us a child is born, to us a son is given, and the government will be on His shoulders. And He will be called Wonderful Counselor, Mighty God, Everlasting Father, Prince of Peace. Of the greatness of His government and peace there will be no end.

As we begin to celebrate Christmas, I encourage you to start with Advent and remember the faithful God who fulfills His promises. Not only in our past, but He will fulfill His promises today and in the future. Jesus is coming back to make all things right and finally complete Isaiah’s prophecy in its entirety.

As I ask how to celebrate Christmas, I pause and marvel at the reality of Jesus’ birth. John sums it up in the opening to his gospel.

​​The Word became flesh and made His dwelling among us. We have seen His glory, the glory of the one and only Son, who came from the Father, full of grace and truth.

I confess, I often forget the wonder and mystery of this, especially during the craziness of Christmas. So as you begin to plan your Christmas celebrations, why not take some time to pause and reflect on the wonder of the incarnation? The idea is that the almighty God, creator of all things, became a baby, wholly dependent on human parents. Here’s a post to help you as you think on the incarnation. 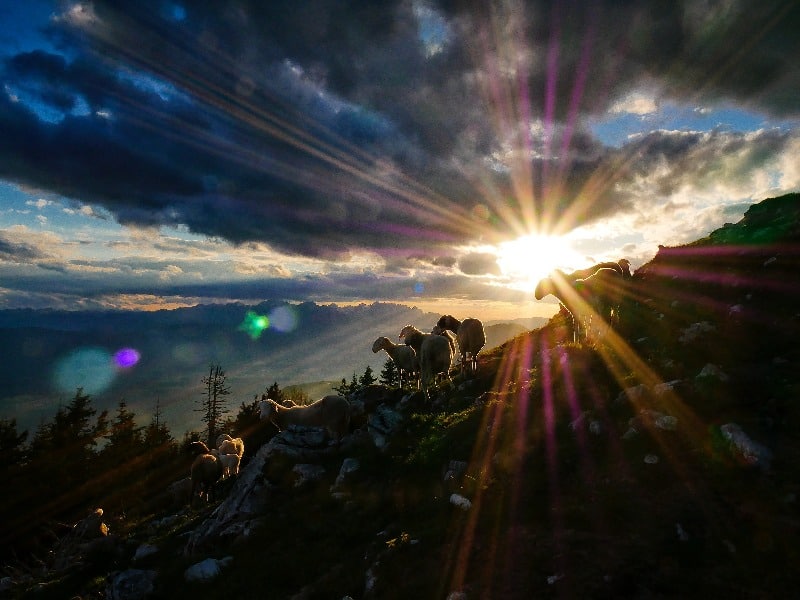 How to celebrate Christmas with the shepherds

When I was thinking about how to celebrate Christmas, I turned to the shepherds. I dressed up in my school play as a shepherd with a towel wrapped around my head as a child. So I had a nostalgic, sanitized view of the shepherds. But, unfortunately, that was not the reality during the time of Jesus. In those days, shepherds were outsiders and had a reputation for being rogues. I try to remember that as I read the account of the angels visiting them on a lonely hillside.

The story of the Shepherds

And there were shepherds living out in the fields nearby, keeping watch over their flocks at night. An angel of the Lord appeared to them, and the glory of the Lord shone around them, and they were terrified. But the angel said to them,

“Do not be afraid. I bring you good news that will cause great joy for all the people. Today in the town of David a Savior has been born to you; He is the Messiah, the Lord. This will be a sign to you: You will find a baby wrapped in clothes and lying in a manger.”

Suddenly a great company of the heavenly host appeared with the angel, praising God and saying, “Glory to God in the highest heaven, and on earth peace to those on whom His favor rests.”

When the angels had left them and gone into heaven, the shepherds said to one another, “Let’s go to Bethlehem and see this thing that has happened, which the Lord has told us about.” Luke 2: 8-15

​​This account in Luke’s Gospel reminds me that my past, occupation, reputation, accomplishments, or salary are irrelevant to God as I celebrate Christmas. He is the one who is calling the outsiders and those who don’t fit in. He includes the poor and vulnerable and welcomes them all to the birth of His Son. So as I celebrate Christmas, I try to focus on those who are outsiders or are lonely over the holiday season. Christmas is about welcoming those people to the amazing good news that God sent His only Son to welcome us home.

How to celebrate Christmas with the wise men

The wise men or magi are a fascinating inclusion in the Christmas story. They have helped me tremendously when I think about how to celebrate Christmas. But, unfortunately, we don’t know a huge amount about these men.  However, we do know is that they studied the stars, came from a long way away and were extremely wealthy.

“After they had heard the king, they went on their way, and the star they had seen when it rose went ahead of them until it stopped over the place where the child was. When they saw the star, they were overjoyed. On coming to the house, they saw the child with His mother Mary, and they bowed down and worshipped Him. Then they opened their treasures and presented Him with gifts of gold, frankincense and myrrh.” Matthew 2: 9-11

In many ways, like the shepherds, they would have not been included in the Christmas story as they were gentiles, foreigners, and therefore not part of the nation of Israel. The Jewish belief system would have excluded these men from the presence of God. They would have been labeled unclean. Yet God, in His amazing grace, reached out to these men and led them to His infant Son.

Thus, the Father sent a powerful message to all of us as we celebrate Christmas; all are welcome to come to Jesus. Therefore, no one is excluded because of the colour of their skin, who their parents were or where they were born.

I try to remember this at Christmas, especially as our world seems increasingly divided. Moreover, the celebration of Christmas is a message of reconciliation, unity and of peace. Jesus invites all people, every nation, tribe and tongue to come to Him at Christmas.

Photo by Tessa Rampersad on Unsplash

Photo by Jaka Škrlep on Unsplash